Center Pivots and Irrigation Pumps: The Right Amount of Water at the Right Time

From planting the seeds to harvesting, the relatively short life cycle of a crop is marked along its way by specific growth milestones that help indicate the health of the overall yield. Most of these milestones are dictated by water – whether too little, too much or the right amount. In northwest Ohio, where McClure Farms and fifth-generation farmer Terry McClure call home, rainwater is historically more plentiful than it is in other parts of the country, making these important growth milestones less stressful to hit.

“There are farmers in our country that spend all of their time looking for the next drop of water,” states Terry McClure, about the rain and soil conditions in Paulding County, Ohio. “We just happen to farm in an area that has heavy, black soils and historically has gotten a fair amount of rain.” 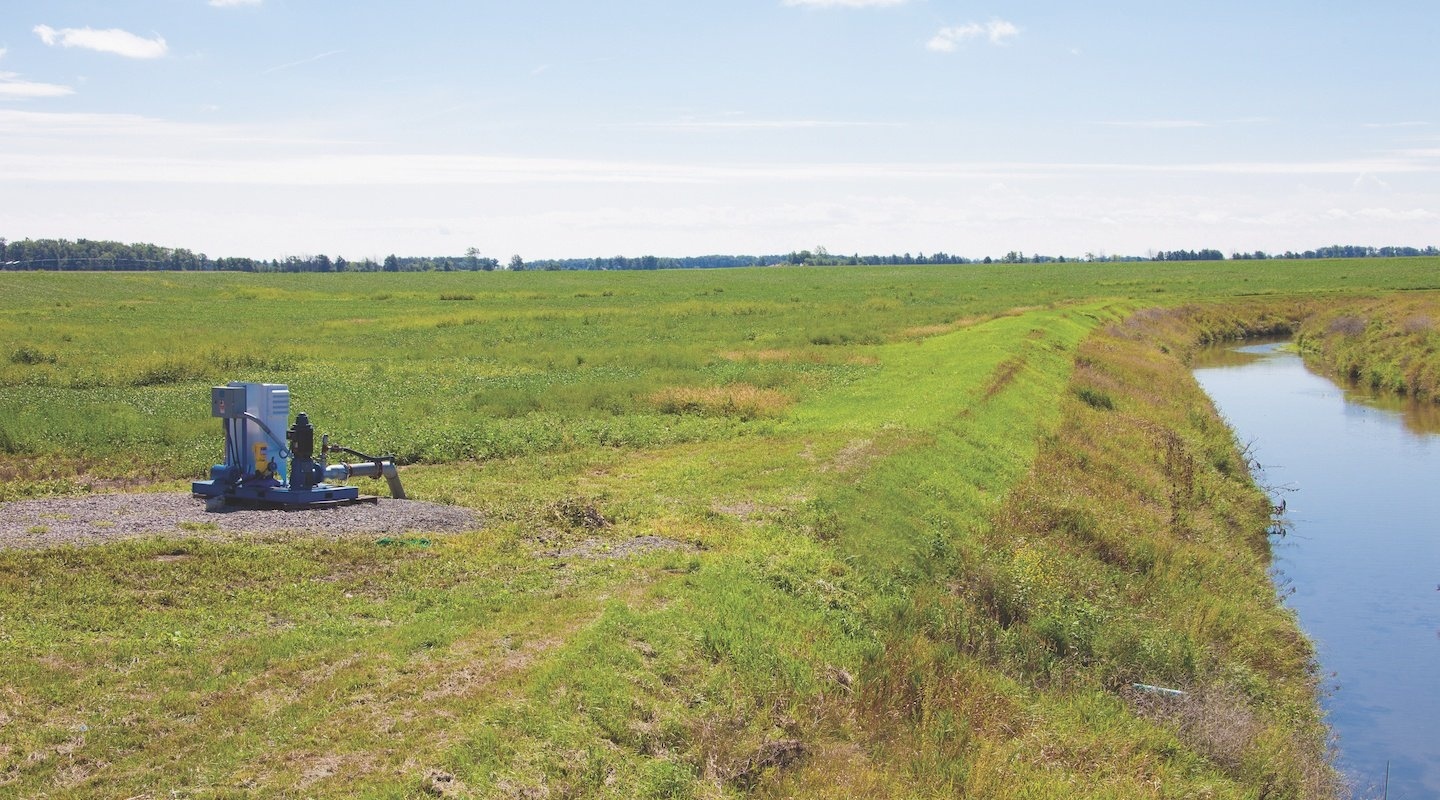 Pumping water out of a nearby creek has improved the McClure's irrigation process, revolutionizing six generations of farming on their land.

Though rainfall is plentiful in most years, Terry and his son Ryan are no strangers to needing more water during specific times in the growing season. During drier years, they have wondered what they can do to supplement rainfall and stay on track with crop growth. In similar areas of the country, farmers install supplemental irrigation systems to help out their crops, a practice that first piqued their interest in bringing center pivot irrigation to McClure Farms.

“Our experiment with center pivot irrigation for the farm really is about that one inch, or two or three inches of rain, at the right time in the season that we always pray for,” McClure explains.

Generations of Farmers, History in the Making

McClure Farms is a six-generation farming operation that grows corn, beans and wheat, and raises both cattle and more than 18,000 hogs. Terry, the fifth generation in the line of McClure farmers, runs the family operation while Ryan handles the day-to-day irrigation operations, each striving to carry on the legacy left by Terry's father, Darwin. Terry says that there isn’t much irrigation in their area for two main reasons: all of the rain that they get and the limited amount of groundwater available for an irrigation pump system.

Several years ago, the McClure family looked into installing a center pivot to supplement their annual rainfall, but it wasn’t in the cards at that time. “When we started looking at drilling wells into our limestone, we were told the most they thought we could find was a couple hundred gallons of water per minute, and we would possibly risk the neighbor’s wells. So, at that point, it came off the table,” Terry remembers.

It wasn’t until a few years later when Terry received a fateful call from irrigation specialist Andy Farnham at A.G. Irrigation that put installing a center pivot back on the table for the McClure family. “Andy literally cold called me because he knew we had been looking into this in the past,“ says Terry. “(Andy’s) call was wrapped around if we could figure out an alternative water source to irrigate with.”

After considering water source options, such as building a pond to pull from, Andy and Terry decided to bring in the irrigation pump experts from Valley®  to look into pumping water from a nearby creek. “Andy got Valley involved, the water people who are used to putting irrigation pump stations in creeks. They came out, looked at our site, and did the calculations on the back of an envelope quickly right there and said ‘yeah, we think this is totally do-able’.”

The pump site turned out to be an ideal location for what they wanted. Local electricity was readily available, and the irrigation pump was less than half a mile away from where the first pivot was designed to be installed. “Literally, we’re pumping water out of a creek that you would not assume would be able to support this,” explains Terry.

Valley installed a 500-gallon-per-minute irrigation pump that supports two Valley 8000 series center pivots over 260 acres of land; the team at Valley strongly believes they can supply a third pivot that feeds from the same source in the future. “We can pump water, and we can get three center pivots off of this pumping station. We’ll take that.”

Not only did the McClures install the first center pivots on their family farm in six generations of farming, but they also established a strong working relationship with their irrigation dealer. “The McClure family is a very honest and trusting family that put a lot of faith in myself and our dealership, as well as Valley,” says Andy. “We were doing something that was very out of the ordinary for this part of the country, and they have been open to new ideas and opportunities along the way.”

After two seasons with their irrigation pump and center pivots in place, the McClures can already see the benefits of the project. They utilize their pivots in a bit of a unique way, where they put down a “shot” of water at precise moments when the seed or the plant needs it the most, making sure they hit their growth milestones. “Wheat usually gets starved a little bit for water during corn and bean planting time, which is normally a fairly dry time,” explains Terry. “We are able to add water to it, then give it that last shot it needs.”

It’s not just their wheat that has benefited from the irrigation, but the corn and beans, too. “After you plant your corn or your beans, or even your wheat, putting that quarter inch of water on top of the field right as you are pulling out to make sure that the seed starts and gets germinated as quickly and as evenly as possible can make all the difference to the development of the plant. We don’t know exactly how much yield that might be worth, but we think that it might be quite a bit.”

Looking to the Future

The end goal for Terry and McClure Farms is to do more with what they have. When looking at the big picture, the population of the earth is growing rapidly, and the demand on farmers grows with it. Terry is taking action to do what he can to meet those new demands. “We see this as an opportunity to take the same land and same machinery, and get more out of that crop,” he states. “Yeah, there’s some management to it, but in today’s world, where my son runs this thing from his cell phone, it’s not like it’s extremely labor intensive.”