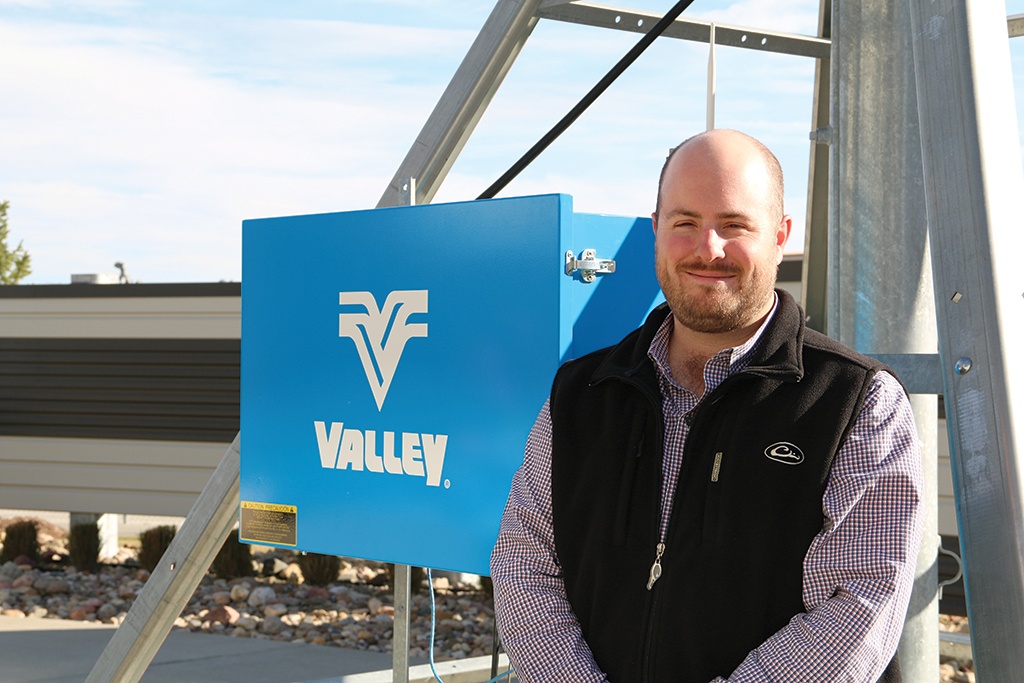 Warbington Farms lies mostly in Dooly County in Central Georgia. It’s a family farm, with three generations working the land together to grow cotton, peanuts and corn. They’ve always been early adopters of new technology, and that has helped them continue to succeed, even during down times.

Austin Warbington, who is the third generation of Warbingtons, along with his cousin and another cousin’s husband, says he’s fortunate to have this opportunity.

“It’s nice working with my family every day,” he says. “We all get along, and everybody works hard.”

The Warbingtons started irrigating in the early 90s, using mostly Zimmatic® pivots, with some Olson and Reinke®, as well. They began making the switch to Valley® pivots a few years ago, when they first worked with Reid Brothers Irrigation out of Unadilla, Ga.

“It was really Blake Reid who got us to switch, because he is such a knowledgeable guy,” Austin says. “We acquired a farm that had Valley equipment on it, and he came out to troubleshoot. We’ve been working with him and buying Valley ever since.

“And, I’m glad we did,” he adds, “because we’ve had more success with Valley equipment than any of our other pivots. The gearboxes are more dependable, the technology works better, and Blake provides excellent service. Any cost difference is totally worth it.”

It was because of that relationship that Blake wanted the Warbingtons to be among the first to test the new premiere smart panel, the Valley ICON10 for irrigation management. 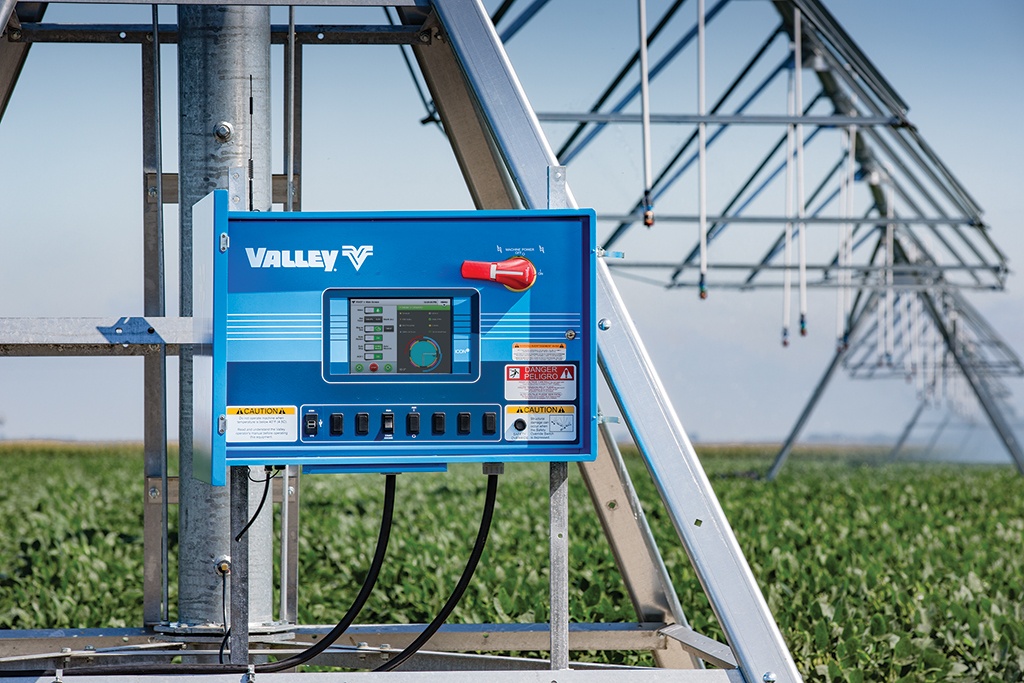 The ICON10 boasts an extremely user-friendly, 10-inch full-color touchscreen at the pivot point. Every ICON10 is AgSense® Enabled, so growers can control their pivots through the AgSense ICON Link on their smartphones, tablets or desktop.

“The Warbingtons are a progressive bunch and they look at things differently,” says Blake. “We’re fortunate they switched to Valley, and we try to take good care of them. I knew they would be willing to try something new, because they like to have the latest and greatest on their farm. ICON10 is definitely that.” 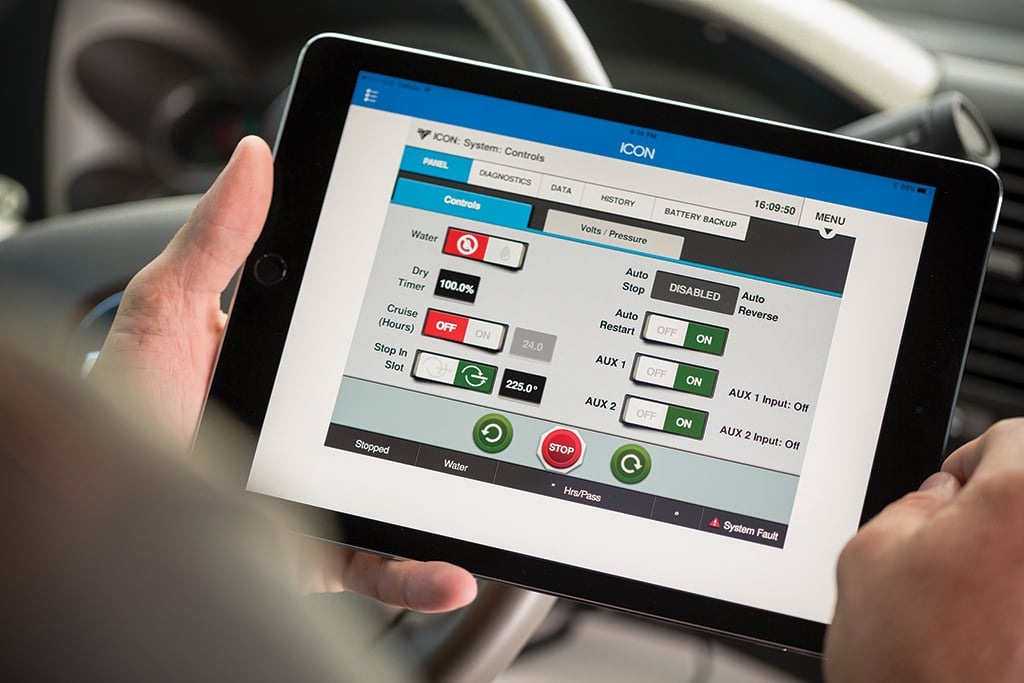 Austin also got the optional Edge-of-Field WiFi with his ICON10, which lets him manage and control his pivot from almost anywhere in the field with the ICON app. During his first season with the ICON10, Austin opted to use that option the most.

“The app is flawless, as far as I can see,” Austin says. “It shows me exactly what I’d see on the screen at the pivot point. It’s really impressive, and it was a real luxury to me, because I don’t have to run over the crop to get to the pivot to control it. It’s especially nice when it’s been raining, and I want to turn the pivot off. I don’t have to drive out on muddy roads to do it. It just makes sense.”

Austin says his dad and uncle, Teel and Jim, are even more tech-savvy than he is, and are quite particular about technology.

“It’s very rare that my dad isn’t critical of new equipment,” says Austin. “He’s run just about every type of panel and pivot there is, and he had no negative comments about the ICON10 at all. That’s unusual.

“My granddaddy likes to work right at the panel, and he can do that well, too," Austin laughs. "It’s so easy to read and understand. Plus, I can check it with the phone after he’s done working on it.”

Warbington Farms is already familiar with remote farm management telemetry, as they’ve been using AgSense for the last five years on one of their farms, which they completely automated. Because they recognize the value of that service, they plan to implement more remote farm management over the next few years.

For example, they are installing a new Valley pivot in the spring, complete with another ICON10 smart panel. While they’ll plan to have the option of Edge-of-Field WiFi on this one, they plan to use AgSense remote telemetry to manage it.

“The main thing is to control it remotely,” Austin explains. “While the WiFi feature has great range for localized irrigation management, we’ll manage our pivots that are farther away with AgSense. We have about 80 pivots to manage, so it’s a lot to cover. We’ll be replacing some of our older pivots with Valley, and every new one will include an ICON10 panel.”

Blake says the Warbingtons hope to eventually bring their other brands of pivots and those with mechanical panels into the same network by installing some Valley ICONX panels on them as well. The ICONX works by taking control of any existing pivot panel using that panel’s circuits. It’s compatible with all major pivot and panel brands, so growers can gain complete and simple control from one source.

“They’ve been looking at implementing variable rate irrigation in more fields, and the ICONX makes it more viable for them,” Blake explains. “It’s something we’re exploring, just to give them better control.”

“Anytime I can avoid a trip out to the pivot point is time saved,” says Austin. “With all the options we have with our ICON10, we can run the pivots however we want. It gives us real flexibility, and it’s extremely easy to use. I’m a big fan.”