On Black Mesa Farms, their main objective is to raise families. Raising potatoes and other crops is simply a means to that end. Decisions on the farm are influenced by their “family first” philosophy, from the crops they grow to the way in which they irrigate, their commitment to family is resounding.

Justin Wootan is the owner/operator of Black Mesa Farms in King Hill, Idaho. While he grew up on the farm, he left to become an aeronautical engineer. As he climbed in his engineering career, designing airplanes and moving into upper management, Justin determined he needed a change and to focus on a different way of life. He and his wife decided to move back to the farm to raise their children.

“We are family-centered, and farming makes that possible,” Justin says. “It’s beneficial to the kids to learn responsibility and grow up with that sense of life. It was great for me, and in turn we want to provide the opportunity of that life for our kids.”

Meeting the Challenges of Growing Potatoes

Justin has irrigated with two pivots for some time, but until recently, he used only solid set irrigation over his potatoes. He would generally apply two inches of water over a 12-hour period, followed by a few days of drying out the field. He says there were always problems with that type of irrigation set up, including fungal issues.

“We had some success, but it seemed like we were always over- or under-watering, and it was very hard to get it right,” Justin explains. “We’d sometimes fall behind in our moisture levels, and we’d have to play catch up. Fortunately, we could catch up with solid set. The problem is, it was also very expensive and time consuming.”

In fact, Justin says he had to spend tens of thousands of dollars per year in labor alone.

“We’d spend $50,000 to $60,000 each year because we had to move all the pipes from one field to another as we rotated our potato crop with other crops,” he says. “Then, there was the maintenance cost, and the time it took to actually operate the system. It wasn’t a great situation.

Justin decided to make a change and try pivots over his potatoes to save both time and money. Because he already had pivots, he knew that they would be much less labor intensive, but he did have concerns about keeping up with the watering needs of his prize crop

Justin likes to be on the cutting edge of technology when he sees a tangible benefit. So when he heard about a drive that would allow the pivot to move faster, he asked his Valley® dealer, Jim Schrader of JTS Farmstore, if Valley had anything that would compete.

“I was about to purchase a new pivot, and I really wanted one that could move fast enough to keep up with the kind of irrigation my potatoes require,” Justin says.

Schrader informed him of the new Valley X-Tec™ advanced DC drive motor that was in field test with Valley. It would move a pivot up to twice as fast as other motors. Justin became one of the first in line to put it to the test. 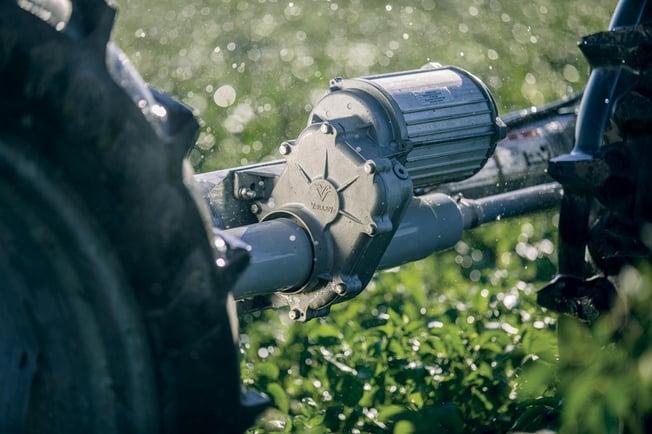 The Valley X-Tec is a new DC drive motor that runs full torque at speeds ranging from 1 RPM to 136 RPM. Its patented alignment technology provides greater precision and consistent application while keeping correct alignment over varying terrain. That was appealing to Justin, but what he really values is the speed the Valley X-Tec provides.

“To get high-quality potatoes, we need lots of water, and Valley X-Tec helps us keep up with the crops’ high demands,” he says. “We run our pivots all day during the hot season, and our pivot with Valley X-Tec technology lets our irrigation package match the water intake rates of the soil and evapotranspiration.” 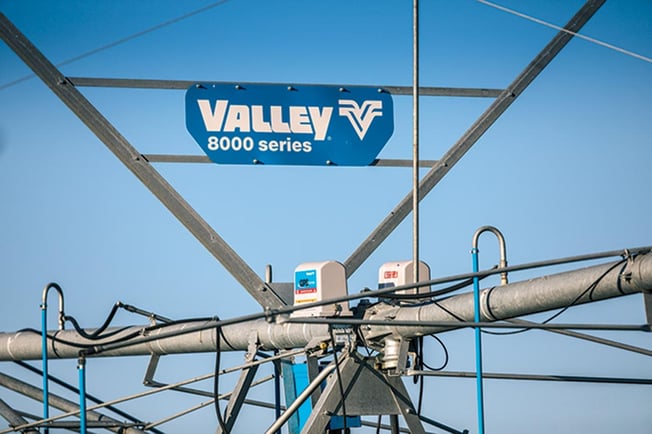 Remote Telemetry Brings It All Together

Justin began using AgSense® remote telemetry three years ago, so it was an easy decision to use it on his newest pivot, as well.

“I like it because I can use it to start and stop multiple pivots at multiple locations at the same time,” Justin says. “When I’m harvesting, I don’t have to stop to move pivots. I can just do it on my phone. It lets me squeeze all the time out of the day that I can.”

His newest pivot is equipped with a Valley ICON10, the latest in smart control panel technology. Justin can control it at the pivot point on a 10-inch, full-color touchscreen display or through AgSense ICON Link. But, he also uses the Valley ICON® app with Edge-of-Field WiFi to control his pivot.

“It’s easy to put the panel in service mode for troubleshooting,” he says. “I’ve been doing so much experimenting on this field that it’s been very beneficial.” 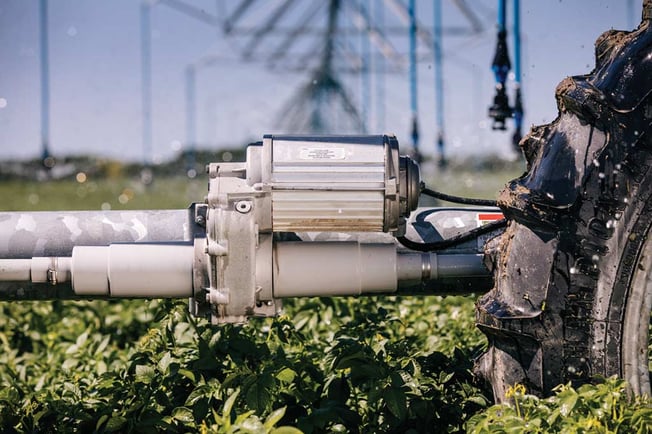 The benefits of his new pivot with the Valley X-Tec drive were so apparent that Justin quickly ordered another one. This one includes variable rate irrigation (VRI) and resides on a sloping field with crustier soil – a completely different situation.

“After watching the power of the Valley X-Tec, I’m very confident that it will work on very hilly terrain,” Justin says.

It’s not just the terrain and soil that are different, though. The addition of the pivot this summer has already changed the way he farms.

“We were going to put corn in, but instead we planted organic, short-season potatoes,” he explains. “We planted it late – on July 11 – so we’re still seeing how it develops and matures. It’s a big experiment. No one has ever done this before. We wouldn’t have even tried it without a Valley X-Tec on it.”

Because of the labor and time savings, along with the improved health of the plants and the flexibility his pivots offer, he continues to move away from solid set irrigation and toward pivots.

“I started with two pivots, and I’ll have nine by the time I have everything in next year,” he says. “I’ll probably put in a couple more in a few years.”

“It’s the logical choice to include X-Tec on my pivots, too. It’s easy to incorporate VRI, and it helps the health of my plants and the quality of my products. It can help my operation, and it saves me time that I can spend with my family. That kind of investment makes a lot of sense to me.”

Contact your Valley dealer to learn more about the Valley X-Tec.

Did you enjoy reading this article? Check out these next:
3 Irrigation Management Features for When You Boot Up Your Valley ICON Panel for the First Time
Valley X-Tec: This Center Drive Motor Will Change the Way You Irrigate