Irrigation machines are a familiar part of the landscape in south-central Nebraska. The Johnson family farm is no exception, with center pivots covering acres of green fields that are spread over many miles.

Brian Johnson farms with his father Bill and brother Blake, growing corn, soybeans, and peas, along with some dry land wheat. They began irrigating in the 1970s, when pivot irrigation technology was brand new, and they’ve been growing with it ever since.

“Using pivots saves us a lot of water,” Brian says, “and we get more yield consistency under pivots.”

As the farm continues to grow, the Johnsons continue to add center pivots, all of which they need to control. Some of them are as far as 18 miles away. That’s why they were early adopters of telemetry to control and manage their pivots remotely.

“We started using AgSense® about five years ago,” says Brian, “and we add it to more pivots every year. The app is what really made the difference, because it’s very easy to use. We know exactly what’s happening with our pivots, and it saves us so much time. We currently use it on 85 or 90 percent of our pivots, and by next season, we’ll have it on every machine it’s possible to have it on.”

While the Johnsons have some older Valley® Select2 panels, most of their irrigation machines use Valley Pro2 panels, specifically so they can use remote telemetry. According to Jeremiah Johnson, Product Manager for Central Valley Irrigation in Holdrege, Neb., that was one reason he approached Brian to try the new Valley ICON10 smart panel.

“Brian has been working with Central Valley since the early 90s, and they’re very loyal Valley customers,” says Jeremiah. “They’re also aggressive growers who are willing to try new technology, so they were a good fit to test the ICON10.”

The ICON10 provides the most options and the largest touchscreen in the Valley ICON® line of smart panels. The 10-inch, full-color display lets operators control and monitor everything right at the pivot point. It also comes equipped with AgSense ICON Link for seamless control and monitoring through the AgSense app or desktop interface. Growers who already use AgSense can easily expand their network without additional hardware.

Brian installed the ICON10 on a half-mile, half-swing pivot. He says much of their interaction with the panel this last growing season was at the pivot. However, he did start managing it through AgSense toward the end of the season, and he plans to control it remotely next season.

“Programming the ICON10 was easy,” Brian says. “I can really see what’s going on with my pivot at the screen, and I have a lot more control now. I can tell it to slow down and add more water in one area, and to speed up in another. That’s been especially important with the unpredictability of water in the area.”

Brian is replacing a storm-damaged pivot this spring, and he plans to put an ICON10 on that one, as well.

“While I personally will control that pivot remotely, we have some others, including my dad, who are more comfortable going to the pivot point to manage the machine,” Brian says. “The ICON10 provides top-notch control either way, so it accommodates all of us.” 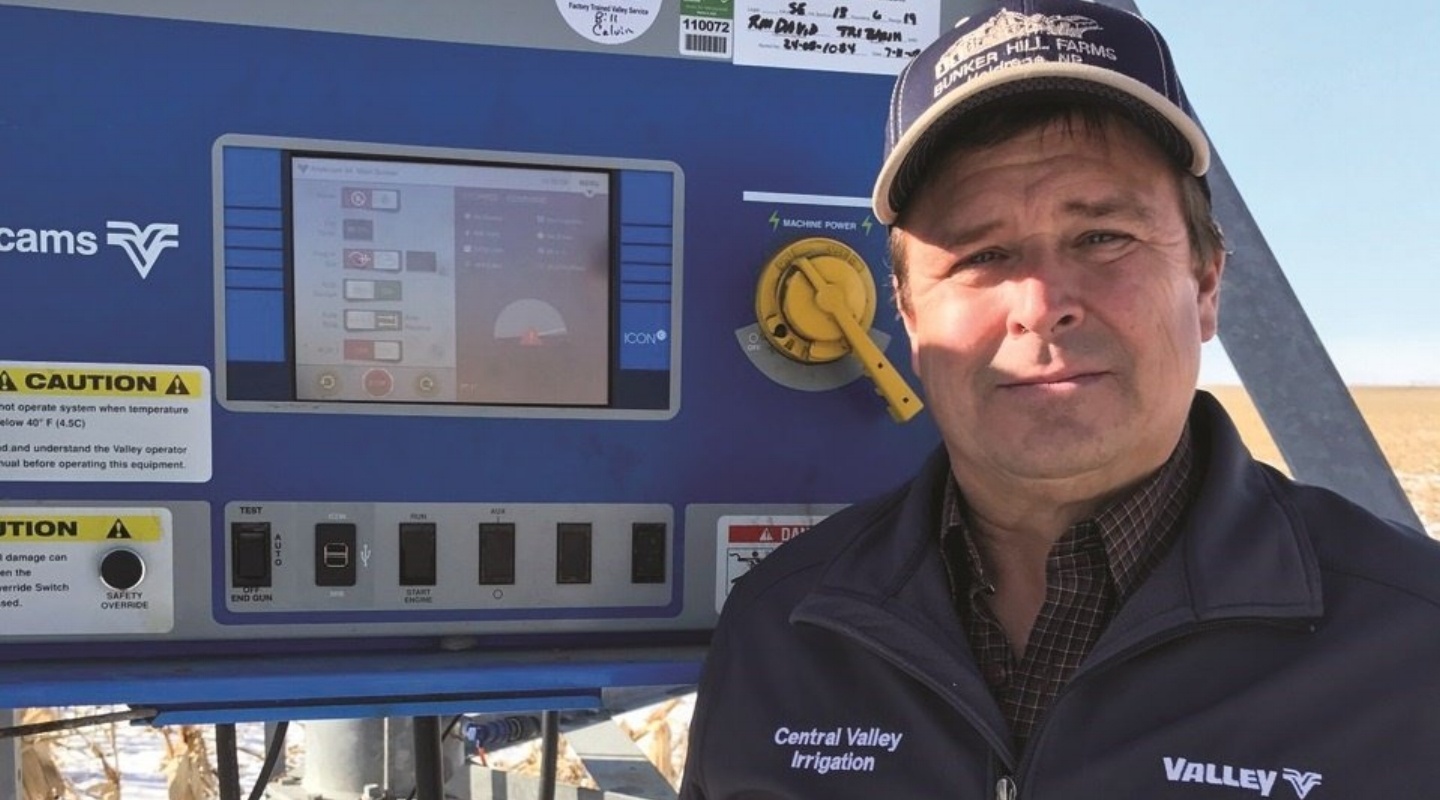 The Johnson family farm greatly enhanced their irrigation management with Valley ICON10 smart panels, whether they are controlling them remotely or at the pivot point.

Making the Most of the Land

Moisture unpredictability has also prompted Brian to add some corner machines. He has several Valley Precision Corner® machines and one VFlex™.

“As we upgrade pivots, we’ve slowly started adding corner machines, because we didn’t want to lose irrigated acres,” explains Brian. “In the dry years, we hardly had anything in those corners that weren’t irrigated. It took a couple of years to get the soil moisture up where it needed to be. With our corners, we have irrigation on about 98 percent of those fields.”

In fact, Jeremiah says Brian has corners on just about every field they can.

“He’s even got a DualSpan Corner, which reaches out farther than any other corner machine,” he says. “It’s very important to him and his family to get as much out of every field that they can, and they’ve got the technology to do it.” 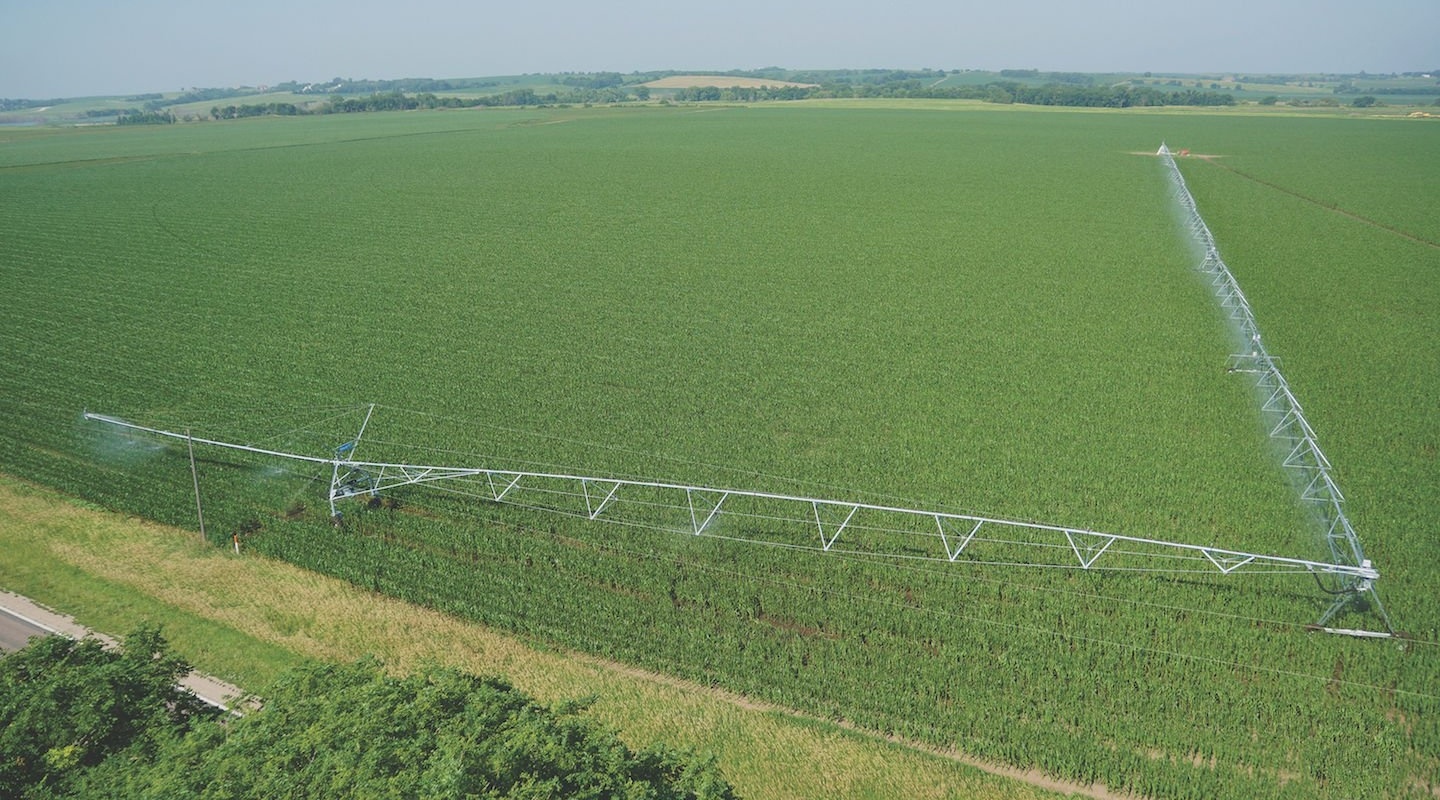 Upgrading on the farm has included adding Valley corner machines, which have improved the reach of the Johnsons' irrigation, covering 98 percent of their fields that utilize them.

Brian says that along with time savings, the information their technology provides has helped his family solve problems in recent years.

For example, one of the ways the Johnsons save is by using "interruptible" irrigation service through Southern Power District. This program allows the power company to interrupt the power going to any electric irrigation machine, as they deem necessary. They then lower the electricity rate for the farmer.

While that is a money saver, it does require extra monitoring. Brian gets alerts on his smartphone every time his various irrigation machines turn on or off due to this interruptible service.

“We did have one issue with it, because one pivot would just shut down repeatedly for no apparent reason,” says Brian. “Then we discovered lots of farmers in the area were having the same issues. No one could figure it out.

“Through AgSense, we had logs of all the times our pivot would shut down. So, with Jeremiah’s help, we discovered that the railroad service had changed their radio frequency, and that interfered with Southern Power’s interruptible service. The only reason we ever got it fixed was because we had access to all of that information.”

Brian says he also sees advantages in remote pivot management when they chemigate or fertigate a field.

“We can set up the pivot to chemigate or fertigate, and have the pivot shut off when it’s done,” says Brian. “Then we can shut off any chemical application and just water again. It really simplifies things for us.”

As their farm expands, that simplification is crucial to daily operations.

“I get alerts on all of our pivots,” Brian says. “I know when any pivot moves, and I can turn them off after a rain to save water, without having to drive to each and every one. I’m saving time and water, and I have more control. Controlling our pivots this way makes irrigating so much easier.”