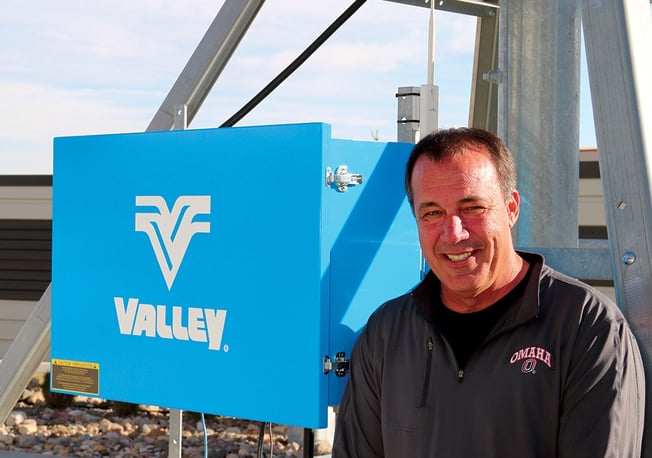 Valley®. Zimmatic®. Reinke®. T-L. Those are all the brands of pivots and control panels on land that Brian Petersen farms.

Brian, along with his son, brother and nephew (Bennett, Steve and Mark, respectively), grows corn, soybeans and specialty crops like seed corn and annual rye near Minden, Neb. As Petersen puts it, they have a very “mixed bag” when it comes to pivots and control panels, and that can make farming their rough, sandy soil even more challenging, especially when it’s spread over 30 miles.

Jeremiah Johnson, Project Manager for Central Valley Irrigation in Holdrege, Neb., says he approached Petersen about putting the new Valley ICONX smart panel on one of his Reinke irrigation machines to see how remote center pivot control and management of his pivots could save time and labor costs on a daily basis.

The ICONX is one of the new smart panels from Valley Irrigation. It gives growers the ability to bring pivots of every brand into the AgSense® or BaseStation3™ network for full remote center pivot control and management capabilities, but without the cost of a full panel upgrade. It works by taking control of any existing center pivot panel using that panel’s circuits, and it’s compatible with all major center pivot and panel brands.

Jeremiah installed the ICONX on a more distant Reinke machine. Petersen’s old panel was very basic, with only on/off and forward/reverse controls at the panel. The ICONX used that panel’s circuits and bypassed them to offer control through the AgSense ICON app that Petersen uses on his Android phone. 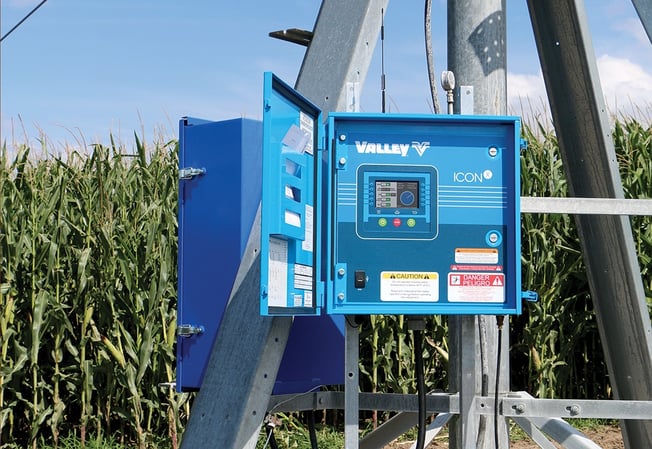 “There were five or six people dealing with different control panels every day on the Petersen Farm, and that was a real hassle,” Jeremiah says. “Brian decided to try the ICONX, and I think it’s changed his entire perspective on efficient irrigation management.”

Brian had never worked with any sort of telemetry before installing the ICONX. He says that programming and monitoring from his phone really opened him up to the Internet of Things (IoT).

“I can program it, and even change the end guns from the road so I can see exactly where they’re turning on and off,” Brian explains. “Then, I know exactly what’s going on in the field, without having to drive there twice a day.”

By monitoring from his phone, Brian says he can plan better and save on mileage as well. He can check things out first thing in the morning and be alerted 24 hours a day if anything is happening at the pivot.

“I never thought I could justify the cost of an AgSense subscription, but then I tried it. Now I find if I can cut my trips out to those fields in half that will easily pay for the cost of the subscription,” he says. “That’s not including all the time I can spend on other, more productive things, and spending time with my family. I certainly see the value in it now.” Not only that, but Brian says by putting the ICONX on his old Reinke machine, he didn’t have to update his entire pivot right away. “The ICONX brought my outdated pivot into the 21st century,” he says.

“I didn’t have to replace the pivot for the time being. Instead, I could update it less expensively.”

Brian's ICONX was installed after fertilizing season last year, but Petersen plans to control both his well pump and fertilizer pump from his new irrigation technology via phone in the upcoming growing season.

“We do a lot of fertigating, and with the ICONX, we can start and stop the fertilizer pump and keep watering as we do it,” he says. “I like that kind of control.”

He also plans to add ICONX panels to at least six other brand of pivots this year, and he’ll upgrade two of his older Valley control panels to the new ICON10 smart panels.

“If we can have ICONX on more of our pivots, we can gain consistency, which would be great,” he explains. “We’d also eliminate any mechanical error. It could be a real advantage for us. I’m planning to experiment with variable rate irrigation and fertilizing, and I’ll still save a trip a day to all of the fields with an ICON panel on the pivot.”

“I can’t express enough how good the ICON panels are. It’s just so easy to use them.”

Visit valleyICON.com or contact your local Valley dealer today to learn more about the entire line of ICON smart panels from Valley.

Did you enjoy reading this article? Check out these next:
Tech-Savvy Family Farm Implements New ICON10
Introducing the Valley ICONX Control Panel for Irrigation