Water, a Right and a Responsibility. Our Review of “Thirsty Land.” 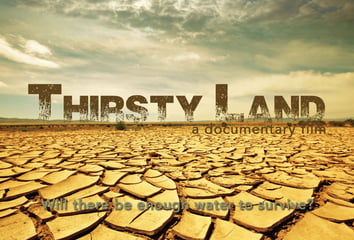 In 2015, award-winning filmmaker Conrad Weaver set out to capture his latest documentary film “Thirsty Land,” a project that spawned during the production of his previous film “The Great American Wheat Harvest.”

“I was talking with farmers all across the Midwest, and the number one issue they talked about was water. This prompted me to begin looking into the story about drought,” said Weaver.

Weaver contacted the Robert B. Daugherty Water for Food Institute at the University of Nebraska, looking for support for his film and seeking more insight into the water issue.

True to the beliefs of our founder.

Robert Daugherty, the founder of Valmont® Industries and pioneer of the Valley® center pivot, was quoted once saying “I don’t want to be recognized, I want to do good.” This statement is the core of the Robert B. Daugherty Foundation, and it echoes in the message that “Thirsty Land” brings to its viewers. Water and food are basic human rights, and it is the responsibility of the many to ensure those rights for all.

“Thirsty Land” is an impactful film that gets under your skin, putting the facts of America’s water issues out on display, calling out the viewer to get off the sideline and take notice that this is not merely a west coast problem; it is a problem for everyone.

In the film, Weaver explores the ways the drought is affecting each sector of the population. With resources so low, every sector is fighting to get what they think they deserve.

“If one sector takes all or controls even most of the water, it will have serious impacts on the remaining sectors,” said Weaver. “Farmers grow our food. City residents need water to drink, bathe, keep buildings cool, etc. The environment needs water to support life in the streams, rivers, lakes and oceans. There must be a balance.”

Approaching the subject from each sector’s perspective, Weaver gives the viewer a heart-wrenching look at what individuals are going through on a daily basis. One California resident went as far as to say that water, a resource she had previously thought was a basic human right, had now become like “gold” to her.

“These sectors need to work together so that future generations will enjoy the same or similar life we enjoy. It’s a matter of life and death. If we waste our resources, the future will look pretty grim,” said Weaver.

Something everybody should see.

The message in the film is both timely and urgent, especially for farmers who are faced with the extraordinary challenge of feeding the world right now, while still conserving enough for future generations.

“Thirsty Land” is currently in the early stages of distribution, with a Film Festival run set for the fall of 2016. “We’re also in talks with a major distributor who’s interested in working with us to get the film onto Video On Demand platforms as well as possibly into limited release in theaters,” said Weaver. “These things take time, but we’ll be sure to let people know when and where it’s available once those things happen.”