Benefits of watering the Ukrainian breadbasket 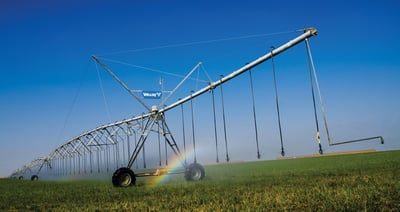 Change is occurring in post-revolutionary Ukraine and this process is having far-reaching implications for the country’s vast agriculture sector. Once known as ‘the breadbasket of Europe’, post-Soviet Ukraine had struggled to maintain that title in recent decades. The country is steadily strengthening this position through the growth and export of key crops with potential for continued dramatic increases. However, considerable investment is still required if the agriculture industry is to finally reach its potential.

Agriculture is an important part of Ukraine’s economy, making up 9.3 percent of the country’s GDP while constituting 17.2 percent of employment and 26 percent of national exports according to World Bank figures. The country’s main grain crops include wheat, barley and corn, which have been steadily increasing in demand. In fact, in the 2008-2010 growing season, Ukraine was the world’s largest barley exporter, occupying 30 percent of the world barley trade. If these positive trends continue, Ukraine grain exports are projected to continue experiencing growth in the foreseeable future, with the potential for Ukraine to become the world’s leading grain exporter.

Grains are not the only Ukrainian crops that have seen substantial production growth in recent years. Its main oil crops, sunseeds, rapeseeds and soybeans, have also seen growth, with Ukraine currently producing 20 percent of the world’s sunseed crop.
Much of these increases can be attributed to excellent growing conditions. The majority of the country’s regions have highly fertile soils, favorable climates, able growers and ideal export locations. However, the yield potential in Ukraine is largely underutilized due to a lack of modernization in agricultural practices. In other words, these impressive figures could be significantly more impressive with the use of the right technologies.

Today, many elements of this irrigation infrastructure are still in place and functional with proper maintenance. While the irrigation machines from this era are now obsolete, much of the surviving infrastructure could theoretically be paired with new irrigation center pivots or linear (lateral move) machines and used once more.

Reducing risk whatever the weather

With crop yield as the main driver for the country’s production growth and the amount of farming acreage projected to remain relatively stable, installing modern irrigation equipment is an important step toward the continued development of Ukraine’s agribusiness.

Much of Ukraine’s crops are currently grown using dryland farming, making favorable weather conditions key to successful yields. This puts the country’s strategically crucial farming industry at the mercy of the elements. Such risks are inevitable in any agricultural undertaking, but better irrigation can reduce the level of risk exposure significantly.

Sergiy Melnychenko, territory sales manager at Valmont® Irrigation in Eurasia, explains, “If we start to irrigate in the area like we used to in Soviet times, we can double the production in southern regions of Ukraine. It has huge potential.”

An increase in irrigated land could allow for the potential Ukrainian harvest of an additional 10 million tons of grain – regardless of weather conditions. Broken down into smaller terms, if a grower were to yield 1.5 tons of alfalfa from each hectare of dry land, that grower has the potential to yield 4 to 5 tons of alfalfa on the same amount of land using mechanized irrigation. This increase in yield would create a more reliable food source for livestock and significantly raise the export potential for Ukraine’s agricultural sector without requiring farmers to expand fields.

This trend toward irrigation growth is already taking place on a global scale. An increase of 40 percent in global food production over the last 50 years has come almost exclusively from irrigated farmland, while rain-fed agriculture has remained largely unchanged. In fact, while only 20 percent of the world’s cropland is currently irrigated, it yields 40 percent of all food production and 50 percent of all crop revenue. A continued increase in irrigated farmland is necessary to achieve high enough yields required to feed a growing world population.

Some growers have already begun taking advantage of the existing but unused Soviet-era infrastructure in Ukraine, updating it with new mechanized irrigation equipment. Valmont Irrigation, the manufacturer of the Valley® brand of irrigation equipment, can help growers make this transition.

Valley center pivots and linears are ideal choices when upgrading to mechanized irrigation. They are closely related because both use a motorized tower concept and apply similarly sized towers and equipment for comparable hectares. However, center pivots are generally more economically feasible relative to other types of irrigation equipment. This is especially true when used on large areas, which is common in Ukraine. Center pivots also have a low labor requirement and circular travel path.

The price of this investment is often a concern for many growers, while others simply do not have access to sufficient sources of financing. Recognizing that the tremendous agricultural potential of Ukraine plays a critical role in contributing to global food security, the World Bank is currently engaged in discussions to finance projects for growers to gain access to the network of canals throughout Ukraine that are left over from the Soviet era. Additional talks are underway to develop a legal framework for secure land ownership. These initiatives hold great promise for the future, although the extent of the World Bank’s investments has not yet been solidified.

With so many advantages, Ruediger Claas, general manager at Valmont Irrigation in Eurasia, said the biggest benefit of investing in mechanized irrigation equipment is the return on that investment.

“If you’re purchasing irrigation equipment, it’s a fast return on investment, and it’s a kind of insurance against being reliant on rainfall,” Claas concludes.