JCS Family Farms is setting the stage for center pivot use in eastern Iowa. Because Iowa is known for its reliable rainfall and rich, productive soil, irrigating is fairly unusual. JCS is paving new ground by implementing supplemental irrigation to maximize its yields.

Irrigation also improves corn health and quality, and both quality and quantity are important at JCS. The operation is one of the largest suppliers of white corn to Quaker® Oats in Cedar Rapids, Iowa, where its corn is a key ingredient in Cap’n Crunch’s Crunch Berries®. Quaker also uses JCS corn in a variety of flavors and types of grits. JCS waxy corn is used as a food thickener for Cargill and as part of the papermaking process by Ingredion (formerly Penford Corporation).

Working land over a six county area, JCS began irrigating with two pivots on two-quarter sections of land in 2012. The success of that venture led managing partner Jim Sladek to work with Valley® dealer Landmark Irrigation again in 2015, building an 18-acre lake to supply five more pivots and irrigate another 475 acres. Now, 10 percent of JCS’s corn acres are under pivots.

In a normal year – one with plenty of rainfall – Sladek doesn’t see a lot of variance in yield between his irrigated and unirrigated acres. However, in an extremely dry year, like 2012, irrigation can make a difference of 100 bushels or more per acre. That difference was significant enough for the pivots to pay for themselves in a single year.

With yield increases like that, other area growers are starting to pay attention.

“I think some of our neighbors thought we were crazy, but now a couple of them have adopted irrigation practices as well,” Sladek says. “Investing in irrigation diminishes the risk, so we can maintain steady yields and income.” 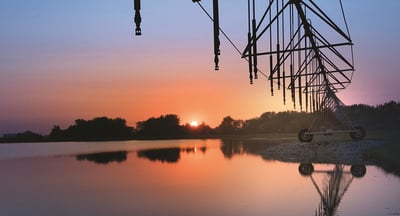 According to Sladek, the amount of total rainfall during the growing season isn’t the only factor. When plants receive the water is just as important as how much they receive.

“The largest amounts of nutrients are needed during corn’s rapid growth phase, and soil moisture must be adequate in the top six or eight inches for the roots to be able to access them,” he explains. “In many years, the only way to guarantee adequate moisture and to keep nutrients available throughout that critical time period is through irrigation. Timing is everything.

“Even in years like 2015 when Mother Nature cooperated with timely rains, having the ability to irrigate was beneficial because we set higher yield goals than we would have without it,” says Sladek. “All inputs are significant, and irrigation on our land and in our region could play a valuable role as we continue the push to increase yields year over year.”

“We irrigate with the same water over and over again,” he says. “Our land is tiled, so we capture both our tile and surface runoff and reuse it. That way, we reduce nutrient and soil runoff, and also minimize the risk of flooding downstream. It’s a win-win system that is sustainable.”

JCS is hoping to gain more exact insight through academic studies. Iowa State University (ISU) is considering a research project on the economic and environmental benefits of water recapture for the irrigation of Iowa’s highly productive soils. Sladek is hoping to partner with the university.

“ISU is intrigued by how capturing runoff and recycling nutrients in a ‘closed system’ can impact water quality,” Sladek explains. “The goal is to increase grower interest and adoption of these types of practices.”