In a previous post, we examined the key issue: the need to increase food production in a water constrained world. Essentially, agriculture output will need to double by 2050, and with agriculture already using two-thirds of the world’s fresh water, this is a mathematically impossible task unless we use water much more efficiently.

So what can we do? Today, I want to share a few of the broad solutions that agriculture experts have identified and Bay presented during his speech. 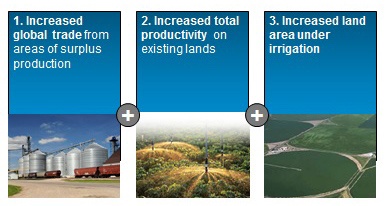 Increase Global Trade
It will be necessary to increase global trade from areas of high productivity, such as North America, Brazil and Argentina, to the rest of the world.

This doesn’t come without complicating factors. Imagine a world of just one country with all regions living in peaceful harmony. We could produce food where it is most efficient to produce and transport it to where it is consumed. We wouldn’t have to worry about international trade agreements, conflict between countries and local concerns about food security. But that is not reality.

Increase Total Productivity on Existing Lands
Regarding the need to improve production on current lands, Bay used an example from the Robert B. Daugherty Water for Food Institute at the University of Nebraska. The institute launched a global effort to quantify the exact yield potential that can be reached in various areas of the world. As an example, irrigated corn in Nebraska is close to its maximum potential, but still has room to achieve 100 percent of its yield potential.

On the other hand, the global yield gap atlas analysis shows that other geographies have a lot to learn and implement. Dryland wheat in Australia, for example, only achieves 70 percent of the yield potential that could be unlocked through irrigation. Kenya only achieves 30 percent of its corn potential. 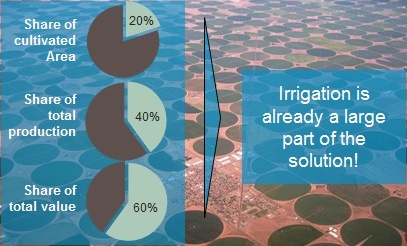 Increase Land Area Under Irrigation
Now let’s look at the contributions of irrigation. According to the Food and Agriculture Organization of the United Nations (FAO), only 20 percent of global cultivated areas are irrigated, but about 40 percent of global production and 60 percent of the total value of agricultural production comes from that irrigated land. These are impressive statistics.

Six decades ago, when the center pivot was first introduced, it was designed to apply water uniformly on a field. The future of irrigation, however, is going to be to provide water not uniformly. We must spoon feed water according to the exact requirements by square yard throughout the field. Fields must be analyzed for soil conditions, moisture levels and other factors, and irrigating done with variable application rates.

Extending irrigation to cropland that is currently dryland or rain fed is also part of the solution needed to meet the increased demand for food production. The FAO anticipates that 79 million additional acres will need to come under irrigation by the middle of this century. And, finally, we will need to increase production by converting less efficient irrigation methods.

Bay wrapped up his speech with the powerful message that most people have no appreciation for the scarcity of water on Earth and the fact that there will never be more of it:

“We don’t appreciate how much of available water is being polluted throughout the world, and we don’t appreciate that a great number of the world’s aquifers are under stress and being depleted. As a global society, we don’t recognize the gravity of the situation. Water is a resource that cannot be replaced. Without water there is no life.”