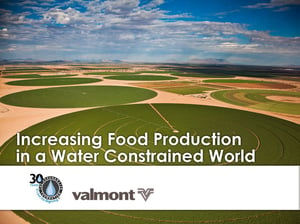 His words really resonated with the conference attendees, so I want to share some the highlights here to get you thinking about water resources – both the issues we face and possible solutions.

Bay pointed out that although production agriculture is the biggest user of fresh water, it also faces the overwhelming challenge of feeding the global population in a water constrained world.

Consider that 97 percent of all water on earth is salt water, only 3 percent is fresh water and of that 3 percent, two-thirds is tied up in the ice caps at the North and South Pole. That leaves 1 percent of all water on earth available for all uses of fresh water. Of that 1 percent, two-thirds is currently being used by agriculture to feed the world. So agriculture has a special responsibility for groundwater because of its huge scale and demand.

Bay called out three key drivers that will continue to put tremendous pressure on the demand on our water supply to feed the world. 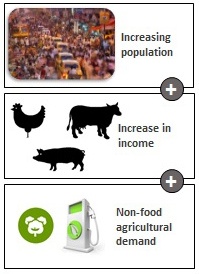 Increase in Income
Second, as the billions who are now very poor struggle to enter the middle class, they will demand better diets, including more meat protein. More meat means much more consumption of water, land and energy. The middle class is projected to gain 3 billion members by 2030.

Meanwhile, the profile of the world’s population will also change dramatically. Migration from rural communities to urban areas will be a big factor, and these urban dwellers will be consumers, not growers, of food. City populations are expected to grow from 3.5 billion in 2011 to 6.7 billion over the next 40 years. That means one new city of 1 million people every five days.

Non-Food Agricultural Demand
Finally, consider that in addition to food, agriculture must produce fiber and bio-fuels. And, water availability is related to energy in many ways. It is diverted to produce hydropower, it is used in huge quantities to effect condensation in fossil and nuclear plants, and it is a major input for mining and oil extraction.

As a result of these drivers, overall agriculture output will need to double by 2050, and with agriculture already using two-thirds of the world’s fresh water, this is mathematically impossible unless we use water much more efficiently.

To put this challenge in perspective, the amount of food that will need to be produced in the next 35 years is equivalent to the prior 10,000 years of historical food production. There is much to do and all institutions and businesses involved with production agriculture, whether research, inputs, equipment, transportation or processing, will have to contribute.

What can we do? Learn about possible solutions on Thursday.