Behind the Scenes with Joan Swahn 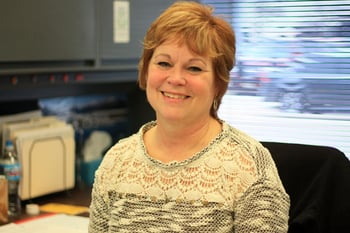 Behind the Scenes at Valley® is a series showcasing the people behind the pivots.

Joan Swahn, global business systems manager, spends her days working on system implementations, defining standard processes to be used globally as part of the implementations; providing ongoing support to domestic and international users; and participating in projects involving new systems and processes. However, this wasn’t always what Joan did at Valmont. As a matter of fact, Joan has seen many sides of the irrigation business during her time at the company.

Joan started at Valmont part-time in 1980 as part of the temporary clerical workforce – lovingly known as the “rent-a-broads” (quite un-“PC” by today’s standards). She stayed in this role for a year and a half working for Pat Conroy, Gene Hansen and Bill Fairfield.

She then left Valmont for a brief time to work at Omaha Public Power District, only to return to Valmont in 1984.

Upon her return, Joan worked as the safety clerk, providing the employees with safety glasses and shoes. In 1990, she moved to the shop – first in a clerical position, then in production control where she scheduled the items that needed to be manufactured for various departments within the Irrigation division.

In 1998, Valmont started planning to upgrade the computer system, gearing up for Y2K, and Joan became part of this team, as it needed someone who was familiar with parts and part routing. After a year and a half on the Y2K team, Joan spent six months helping set up the McCook, Neb., plant for its opening in January of 2000. She helped with inventory stocking, transportation coordination and setting up production control. It was through these projects that she began her career of working on systems and implementations. “It was an interesting career choice considering the fact that when I was in high school, we had no computers,” she said. 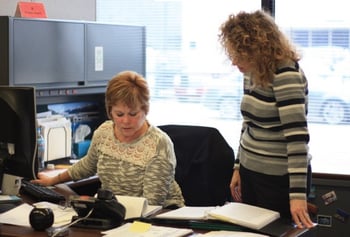 Since system implementation (at that time) was not a full-time job, Joan was also given the opportunity to supervise – first in central receiving, then in irrigation purchasing. When Valmont decided the international sites should be on the same ordering, warehousing and forecasting system platforms, Joan moved into that position full-time. She has had the great privilege of representing Valmont at most of the Irrigation off-sites – Dubai, China, Spain, South Africa and most recently Argentina.

During her tenure at Valmont, she has worked for Don Johnson, Kirby Sullivan, Bob Schulze, Ron Pearson, Dennis Thome, Duane Bier, Gayle Krull, Steve LeGrand, Mike Brown and Andy Carritt. “I have been very fortunate to have had these mentors along my journey with Valmont,” she said.

“During my time at Valmont, it is the people I have met who have had the most impact on me. The dedication and passion of so many people has been a great tutorial. From the shop with its up-front honesty to my international travels that have taught me great humility – there is not a moment I would care to replace.”

Read previous Behind the Scenes profiles: