Growers Power Up Energy and Savings

If you’re a trend watcher, then you know that trends tend to travel from east to west. With variable frequency drives, it’s the other way around. And what an energy-conserving, money-saving trend it is!

As the name indicates, a variable frequency drive (VFD) allows the motor speed to change as water pressure needs vary. According to Tyler Fields, Valley® Water Management product sales manager, VFDs have been used pretty heavily in the hills of the West and Northwest United States for quite some time. 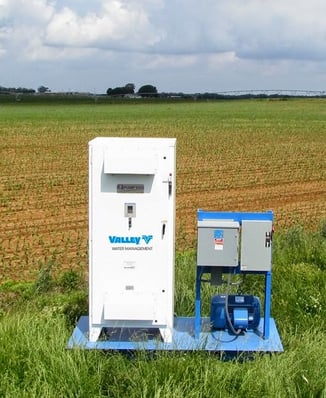 “That’s where growers really needed consistent water pressure, and they quickly saw the benefits of power savings, too,” he says. “Now, we’re offering an additional money-saver, Drive Connect™. It communicates from the end of the pivot to the pump, so the VFD can maintain pressure at the end of the pivot.”

Ryan Christensen can attest to that. Though he’s been using variable frequency drives for just a couple of years in Washington, where he grows alfalfa, timothy, hay, wheat, corn, beans, and cherries, he already has six VFDs. Four of those have Drive Connect.

“The first one I bought sold me on the value of VFDs,” says Christensen. “I have a pivot that’s on a very steep elevation – the end of the pivot goes from way uphill to way downhill, so knowing what the pressure is at the end of that pivot makes a real difference.

“I switched from a 100 horsepower pump that ran all the time to a 50 horsepower that runs at half speed about half the time. So not only are my crops getting watered evenly now, but my power savings should be phenomenal on that one pump alone.”

Power conservation is a big factor when it comes to VFDs, according to Lad Irrigation Sales Manager Doug Muscott.

“Power providers in Washington are very interested in variable frequency drives,” Muscott says. “They help offset the capital cost for the irrigator, while conserving power. Basically, from the power company’s point of view, using a VFD allows more people to have more power available to them. It’s great green technology.”

In Alabama, Lee Sublett is pretty new to VFDs. He has two separate pump stations with VFDs. One is on a creek and fills his reservoir. The other floats in a reservoir and supplies six pivots.

Sublett, a customer with New Market Agricultural Equipment in New Market, Ala., says it takes $2,500 worth of electricity to fill the reservoir, which holds 200 acre-feet. That’s enough water capacity to supply 6 inches of water per acre on 400 irrigated acres.

“I can honestly say that this particular situation would not work with anything other than an electric VFD,” says Sublett. “When the reservoir is full, the pump floats on about 25 feet of water, about 65 feet out.

“It works perfectly. Powering it on and off is as easy as using a light switch. The motor builds up slowly to a preset pressure and then shuts down slowly, too. Also, I can shut down one or two – maybe even more – of my irrigation machines on the pump, and the VFD will adjust and slow itself down to adjust the pressure to those preset settings. The options are practically endless.”

“I really prefer the electric motor, and I love my VFD,” adds Sublett. “My next project will definitely include both.”