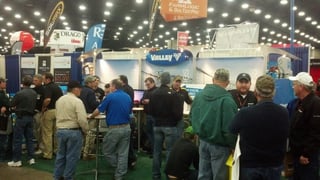 During the week of February 10, there was a show in Louisville, KY, called the National Farm Machinery Show. This just so happens to be the largest indoor show in the United States! It also happens to be one of my favorite shows to attend.

This year was especially a good year because we got to focus on technology. We had a great showing of Valley® representatives, including all the local dealers who helped, and we had an impressive booth featuring two new products, BaseStation3™ and SoilPro™ 1200. We were also able to display the BaseStation3 and VRI in the booth, allowing everyone to really see the advantages.

While I was there, I was asked to be part of a panel discussing Variable Rate Irrigation. We talked about where we are with this technology and where we are headed. The panel of three people and about 100 audience members had an open discussion on VRI. It was a great opportunity to promote this technology and really get it out there in front of the public. 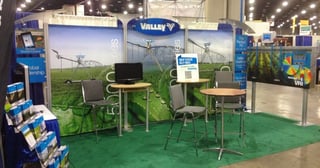 One of the best things about going to farm shows is getting to work closely with dealers and customers. The amount that a person can learn from them is amazing. We also bring back new ideas and thoughts from the people using our products.

Along with all of these great things, there is also the food…and, by food, I mean ice cream! Almost all shows have some sort of ice cream stand that makes the show worth going to! There are also all kinds of the other great eating establishments at the show.

Being able to attend these shows allows a person to see the new technologies coming out and what companies are striving toward in the future. You really get to see where the future of agriculture is going.

Many of you may not have made it to the National Farm and Machinery Show, but if you happen to be in Memphis, TN, this weekend (February 28 and March 1), Valley Irrigation will be at the Mid-South Farm and Gin Show. So feel free to stop by, say hello and see where the future of irrigation is going!