Originally published on Soils Matter, Get the Scoop.

In honor of World Soil Day, we are sharing a blog on the importance of soil and how it cleans our water.

Q: How can soils filter or purify water, such as for drinking water purposes? There are just so many chemicals and bacteria in the soil that you would expect the opposite.

A: If we put some soil in a glass column and pour "dirty" water through it, the water will come out cleaner than when it went in. The soil, in other words, is a reactor. It has the potential to clean up dirty water by a variety of methods. So how does soil do this?

There are three basic ways. The soil is a physical filter that removes particles suspended in water; it is a chemical reactor that removes dissolved chemicals from water; and it is a bioreactor that transforms and degrades chemicals by the action of soil microbes. 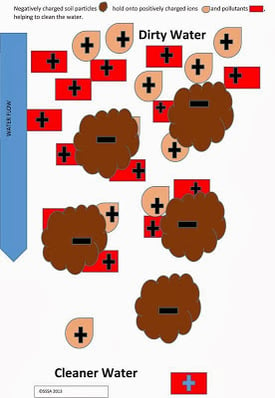 The soil is the largest filter on the planet. The size of the pores in soil (which is based on the amount of sand, silt, clay, and organic matter that make up the soil) determine how effective the soil is at filtering out particles. A finer textured soil (more clay) with many small pores is a better filter. Yet, a soil can be too fine with too many small pores, so that water does not efficiently flow through the soil. A perfect soil has a distribution of pores of different sizes that can both filter water and allow adequate movement of water through soil.

The soil is the largest chemical reactor on the planet. The soil has a net negative (-) charge that triggers the removal of positively (+) charged ions in the water which moves through the soil. These (+) ions are removed from the soil solution much like a magnet with a (-) charge attracts another magnet with a (+) charge. The figure to the right shows how ions like calcium, magnesium, and potassium are attracted and held on soil surfaces. Still other chemicals are removed by the soil by becoming part of the soil structure through a process called covalent bonding.

The soil is the largest bioreactor on the planet. Within the soil, bacteria and fungi transform and decompose chemicals. The nitrogen cycle is especially dependent on the soil reactor. Microbes change organic forms of nitrogen into the ion, ammonium. More microbes change ammonium to nitrate, and even more microbes change nitrate into nitrogen gas, which then enters the atmosphere. Similarly, if the soil "sees" an organic pollutant, microbes go to work transforming and decomposing it, so eventually it becomes carbon dioxide and water.

The net effect is that the soil provides a service to society. It cleans the water that makes its way to rivers and streams. It helps keep the water clean for us to use and for wildlife to survive. If we don’t take care of the "largest reactor on the planet" we may destroy the service it provides and hurt our environment in the process. 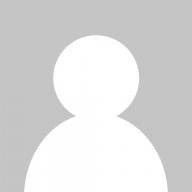 About Nick Comerford
A University of Florida soil scientist and Soil Science Society of America member.