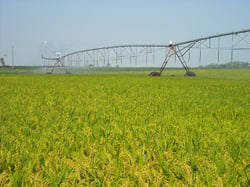 As I sit in the office and watch the snow fall outside in the middle of April, it is amazing to remember that last year many field operations were complete by now. This year, hardly anyone has begun, at least in my neighborhood. What a difference a year makes! A popular response to unexpected (or unwelcome) cold weather is to say “What happened to global warming?” (there it is…that essential segue into the topic of the post!). Today is Earth Day, when the media run lots of stories about the environment, global warming and similar topics. I must admit, when I was asked to write about this topic, I didn’t think too much about it, even when thinking back to the first Earth Day. But then I did a little reflection and simple math and realized that this event is more than 40 years old, and I can remember the first one. Okay, now I feel bad.

Anyway, this seems as good a time as any to do a brief, if self-serving, review of some of the environmental benefits of pivot rice. During the past several years, several things have become clear. First, we have the potential to save lots of water. Our experience shows that we can grow very similar yields of rice to that obtained by flooding, using only 40 – 60% of the water. Second, we can save significant amounts of labor. No levees to build, no special planting operations for flat vs. levee areas, no gates to install, no flush to manage. Irrigating can be as simple as pushing a button, or even just clicking a mouse. In addition to these two primary benefits, there are others that are often overlooked, but exist nonetheless.

Depending on the level of technology used on the pivot, you may be able to check fields electronically, instead of burning fuel driving field to field. There is no concern about levees breaking and flooding adjacent fields or ditches. Herbicides can be more effective when all it takes to activate them is a quick pass with the pivot, instead of flushing the field. Applying fertilizer through the pivot greatly enhances its efficiency, and keeping the root zone unsaturated minimizes both leaching and volatilization losses of nitrogen. Application of chemicals through the pivot, whether fertilizer, herbicide, fungicide, or insecticide (when labeled for the practice) is much more uniform than via airplane, so effectiveness and efficiency is enhanced. This minimizes movement to off-site (unintended) locations.

Albert Einstein said, “Everything should be made as simple as possible, but no simpler.” I think we have a tendency to work hard on the first part of this adage, and to forget the second. All major issues, including environmental issues, are too complicated, and too important, to be viewed as only “two sides” and via five-second sound bites. So, this Earth Day, let’s focus less on catchy slogans and momentary video clips. Instead, let’s work in practical ways to be the best stewards possible of the resources we have inherited. As I saw it (well) put once, let’s become “active environmentalists, rather than trying to be environmental activists." Have a great spring and a safe, prosperous crop year, and stay in touch.